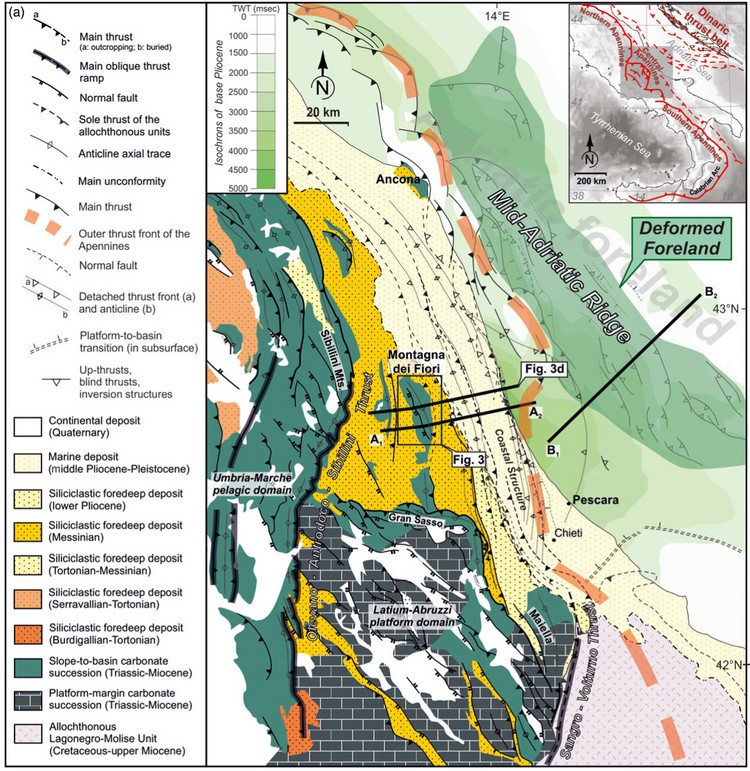 Dinaric up-thrusts in the Pliocene evolution of the Central Apennines thrust belt of Italy: the Montagna dei Fiori structure

Abstract
Several orogenic belts exhibit regional-scale anticlines characterized by prominent faults in their crestal/forelimb zone. These faults are also a common feature in the Neogene fold-and-thrust belt of the Apennines, where they have been contrastingly interpreted as younger-on-older thrust faults, large-scale strike-slip faults, and pre- or syn-thrusting normal faults. In this study, we analysed a NW–SE-trending fault (Montagna dei Fiori Fault) that affects the hinge-zone/forelimb of the Montagna dei Fiori Anticline. This fold is the outermost exposed contractional structure within the Pliocene–Quaternary antiformal stack of the outer Central Apennines. The integration of stratigraphic and structural data collected during a field geological survey enabled us to reconstruct a multiphase reactivation and deformation along the Montagna dei Fiori Fault. From the novel field data, a different interpretation for the evolution of the Montagna dei Fiori Fault is proposed. The fault originated as a Late Cretaceous – middle Miocene, NE-dipping, Dinaric up-thrust and was later reactivated, displaced and rotated during Pliocene Apennine thrusting and related folding, until assuming a present-day SW-dipping attitude with an apparent normal fault character. This newly proposed Dinaric origin of the Montagna dei Fiori structure is compared with an analogous subsurface example of a Palaeogene–Quaternary structure imaged by seismic reflection profile in the Adriatic foreland. The outcome of this combined field and subsurface investigation provides new elements to unravel the complex evolution of the Apennine thrust belt that developed at the expense of a previously deformed foreland, ahead of the advancing Dinaric chain.

© The Author(s), 2021. Published by Cambridge University Press. This is an Open Access article, distributed under the terms of the Creative Commons Attribution licence (http://creativecommons.org/licenses/by/4.0/), which permits unrestricted re-use, distribution, and reproduction in any medium, provided the original work is properly cited.