Open access | Can Hydrocarbon Extraction From the Crust Enhance or Inhibit Seismicity in Tectonically Active Regions? A Statistical Study in Italy 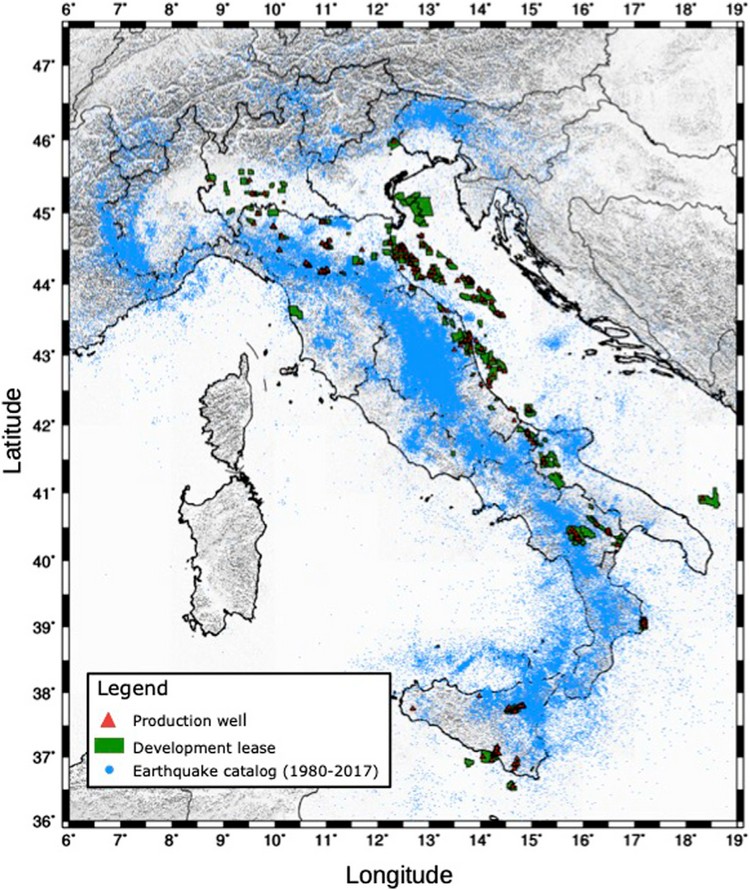 Can Hydrocarbon Extraction From the Crust Enhance or Inhibit Seismicity in Tectonically Active Regions? A Statistical Study in Italy.

Abstract
A number of oil- and gas-producing leases have been operating in Italy in the last decades, many of which are located in the surroundings of tectonically active regions. Identifying human-induced seismicity in areas with high levels of natural seismicity is a difficult task for which virtually any result can be a source of controversy. We implemented a large-scale analysis aiming at tracking significant departures of background seismicity from a stationary behavior around active oil and gas development leases in Italy. We analyzed seismicity rates before and after hydrocarbon peak production in six oil-producing and 43 gas-producing leases, and evaluate the significance of possible seismicity rate changes. In a considerable number of cases seismicity rate results stationary. None of the observed cases of seismicity rate increase after the peak production is statistically significant (at a s.l. = 0.05). Conversely, considering cases of seismicity rate decrease after peak production, our results suggest that the seismicity rate reduction is statistically significant (s.l. = 0.05) around one oil-producing lease (Val d’Agri, Basilicata) and around a cluster of gas-producing leases in Sicily. Our results put in evidence correlated changes between the rates of shallow seismicity and hydrocarbon production in these areas, which are then identified as hotspots requiring more detailed research; assessing actual causal relationships between these processes will require further physically-based modelling. If a physical causative link between these processes exists, then the observed seismicity rate reduction could either be due to increased seismicity during the progressive increase in production before reaching its maximum, or to an actual seismicity rate reduction after that peak. Considering that there is evidence of seismicity occurring before the start of hydrocarbon production, which contrasts with the evident reduction of events observed after the peak production, we think it likely that the seismicity inhibition is a plausible hypothesis. Using a simple model we also calculate Coulomb stress changes in planes optimally oriented for failure, and we show that under some conditions the inhibition of seismicity is feasible in at least one of these cases. We conclude that more efforts to study the mechanisms and the possible consequences of anthropogenically-driven seismicity inhibition are required.

Copyright © 2021 Garcia, Faenza, Morelli and Antoncecchi. This is an open-access article distributed under the terms of the Creative Commons Attribution License (CC BY). The use, distribution or reproduction in other forums is permitted, provided the original author(s) and the copyright owner(s) are credited and that the original publication in this journal is cited, in accordance with accepted academic practice. No use, distribution or reproduction is permitted which does not comply with these terms.